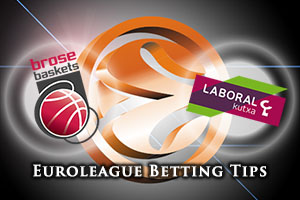 Both teams have a lot to play for in the final game for both sides in the Top 16 but as you would expect at this late stage of the campaign, things are not exactly straightforward. The hosts have to win but then they’ll be looking around at other scores to see how they get on and whether they can get ready for the playoffs.

Brose Baskets are still in the hunt for a playoff spot and they harbour genuine dreams of being the first German side to reach this stage of the Top 16. The only thing that they have control over is whether they win or not and it may even be that their ultimate dreams are extinguished before the game tips off. This is because Brose Baskets also need for Zalgiris, Olympiacos and Khimki to win their games, and the Zalgiris v Barcelona game is the opening game of Group F this week. If Barcelona win, the hosts may be deflated but if Zalgiris pull off a surprise, the atmosphere in Germany is likely to be electric. The nature of the game may be dependent on that earlier score but Brose Baskets will be keen to win regardless of what it really means.

The Spaniards could top the group

Life is a lot simpler for Laboral. The Spanish side already has a place in the next round but they know that a win will give them a chance of topping the group. They face a team with a 9-1 record at home, so it isn’t going to be easy but by the time this game starts, it may only be the away side that has something tangible to play for. If this happens, you should expect Laboral to be the stronger team. Ioannis Bourousis has been hugely instrumental for the Spaniards this campaign and if he has another big night, the away team will do well.