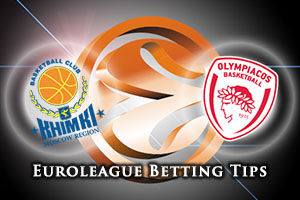 Neither of these teams can book their place in the playoff this week but a loss would be disastrous for the team that loses out. A defeat means that a combination of other results could end one teams’ playoff dreams which means that this game could go either way. There is a strong desire to win and place your opponent in a bad position, but the intensity of what is at stake could lead to a cagey game.

Clearly the hosts want to win the game but if they lose, they’ll be looking at the other scores in a nervous manner. If Khimki lose at home and Real Madrid defeat Laboral Kutxa, Khimki will be out of the playoffs. Also, if Khimki lose, Real Madrid loses and Barcelona win by at least 10 points, Khimki will be out of the playoffs. This means that if Khimki want to remain in the hunt for the playoffs, they have to win. The Rusisan side has a great record at home in the top 16, standing with a 5-1 record and they have a great offensive record, their average of 83 points per game seeing them sitting in third place. They are also first with respect to assists, with a 20.1 average and they rank highly with steals and blocks.

There is pressure on Olympiacos too

The away team knows that if they lose and either Real Madrid or Brose Baskets Bamberg win, they are eliminated from the playoff race. This places a bit of pressure on the away side, but at least they know that they have already defeated Khimki this season. An 89-77 victory in Piraeus earlier in the campaign may not have too much of an impact on this game, but it could provide the away side with an added impetus to push on. There is a need for Olympiacos to get their best players on the ball and as Georgios Printezis is the Greek team’s leader with respect to index rating, with a mark of 15.5 per game, he will likely be a key figure.