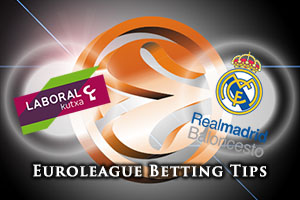 Before this game tips-off, Laboral will know what position they are in with respect to qualification and they could even be guaranteed a playoff spot. If Bamberg or Olympiacos lose on Thursday, Laboral will have a playoff place secured, and this could change the dynamic of the game on Thursday night. However, even with that outcome, the hosts know a win will give them home advantage in the playoffs.

You can guarantee that Ioannis Bourousis will be up for this game. The player won the Euroleague with Real Madrid this season and he is having a wonderful time this season. He is the leading Laboral player with respect to the performance index rating, with 20.3 points per game, he has scored an average of 14.7 points per game and he is rebounding at an average of 9.3 rebounds per game. When it comes to the Top 16, Bourousis is one of the leading players and if he managed to deliver a big performance, he could propel his team to glory. Laboral won the earlier Top 16 meeting between the two teams, winning 68-77 in Madrid.

Real Madrid have to win this one

Real Madrid cannot qualify for the playoffs this week but they cannot be eliminated either. This doesn’t mean that they can afford to relax though because they desperately need a win to make things slightly easier for them when it comes to progressing to the playoffs. Statistically, it hasn’t been a bad season for Madrid, they are the second top scorers in the Top 16, with an average of 83.5 points per game and they are also third with respect to assists, 19.3 assists per game. The big issue for the Spanish giants is the fact that they have allowed the second highest amount of points in the Top 16, an average of 83.8 points per game counting against them in their push for the playoffs. The reigning Euroleague champions are not done for yet, but they do need to improve and find consistency.