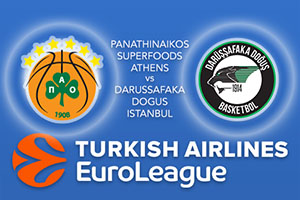 There haven’t been too many clashes between these sides before, they have only met twice, and the Greek side has managed to win both of these games. This and home advantage ensures Panathinaikos start off as favourites for the game on Friday night but they haven’t been in the best of form of late, so they not may be at their best coming into this clash with their Turkish opponents.

Darussafaka are doing okay in Euroleague so far