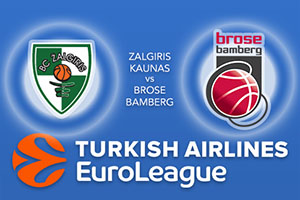 With both of these teams carrying a 2-6 record in the Euroleague so far this season; this could be a clash between two sides that are low on confidence and desperate for any sort of win. There is going to be a huge incentive for these teams because a win over a close rival at this stage of the campaign could be the catalyst for a better run of form. When it comes to the historical record, Zalgiris Kaunas holds a 9-1 record against their German opponents.

Brose Bamberg want to break history in the Euroleague