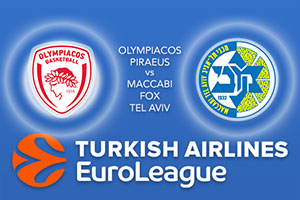 This game sees both sides in an upbeat and optimistic mood and come into this game in a winning mood. This is a game between two sides that have a strong track record in the Euroleague although they haven’t met for four seasons. In games going back to 1976, there is a 12-11 record that lies in the hands of Olympiacos so there is all to play for, both historically and with respect to this season in the Euroleague.

The fact that Olympiacos managed to grab two wins in the double-header fixtures last week, moving them to a 5-3 record, sees the hosts in a good mood for this game. As you’d expect, there are a couple of big name players in the Greek side and Olympiacos are very much reliant on Vassilis Spanoulis and Georgios Printezis. With an average of 15.6 points per game and 12.6 points per game, these are the players that have had a huge impact in the campaign, and in the late win over Panathinaikos Superfoods Athens last week. Another player that is having an impact on Olympiacos is Khem Birch, with an average of 8.9 points per game.

Maccabi enjoyed a great week in the Euroleague last week