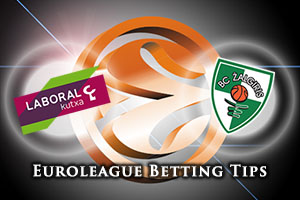 Second plays bottom in this game which has the hallmarks of a routine home victory in Spain but you can guarantee that Kaunas will be keen to avoid another defeat. Another loss for the away team and their hopes of progressing beyond the Top 16 will look quite far-fetched at the start of the second half of this leg of the season.

Laboral enjoyed a very comfortable away win in Kaunas earlier on in the campaign, winning by 68-89, and you can imagine that they will be confident of doing the same this time around. The hosts are second in group F with a 5-2 record and an 11-6 record for the entire season. Ioannis Bourosis was quite in the previous game between these sides earlier in the season but he has been in excellent form for most of the Top 16. Don’t be surprised if he is the player that pulls the strings in this game, which is definitely something that the home fans are keen to see.

With a 1-6 record in the Top 16, things look grim for Kaunas and they know that they have been far from their best this season. There have been injuries to contend with, the loss of Toko Shangelia has definitely hurt the team, but far too many good players have failed to live up to their potential. There is still a chance for the team from Kaunas to haul themselves back into contention in Group F but if they don’t get on top of things soon, it could be too late. An away trip to Laboral is never an easy affair but Zalgiris need to deliver something special in this game if they are going to have any hope