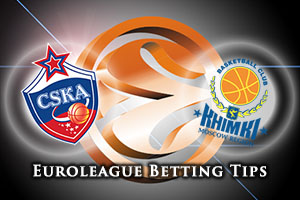 We are treated to another Moscow derby in the Euroleague Top 16 as first plays third in Group F. CSKA Moscow have delivered the sort of form that most of us know they have in their locker while Khimki have been a pleasant surprise, stepping up from Eurocup success to making a right good go of the Top 16. This match should have an edge to it.

Fenerbahce are tearing it up in Group E but in Group F, things are a bit closer with CSKA Moscow leading the way. You can see why the Moscow side are out in front because they are great at going forward. CSKA is the scoring leader in the league with an average of 90.3 points per game, they have made the most three point shots, 165 and when it comes to three-point accuracy, their 42.2% is worthy of praise. When you have players like Nando De Colo and Milos Teodosic on your side, you are always in with a shout and if these two hit top form, it could be a glorious night for the home fans.

Khimki have a great defensive record

While the hosts are well known for their attacking prowess, it has to be said that the away team have made a lot of teams work hard to get points this season. Khimki have one of the strongest defences in the league and it will be an interesting match between two teams whose success rests on very different components. Zoran Dragic and Egor Vyaltsev have been in fine form or Khimki this season and if they perform well on Thursday night, the home fans could be in for a shock while the away fans have something to celebrate. Khimki won the earlier clash between these two teams, by two points in a 91-89 win, and it could be another tight game this week.