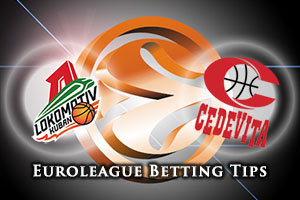 On paper this should be a convincing win for the home side. They have a 5-2 record in the Top 16, with a 13-4 record overall while Cedevita Zagreb come into the game with a 2-5 record in the Top 16 and a 6-11 record for their overall season. As we all know though, Euro league basketball games aren’t played on paper.

The hosts are unbeaten at home in this stage of the tournament and they are joint second with respect to the best record in the Top 16. A major reason for the success that Lokomotiv have enjoyed this campaign can be found in their defensive record. They have allowed less than 70.0 points per game and in Malcolm Delaney, they have one of the key players. Delaney was the MVP for Round 1 of the Top 16 and he grabbed 31 points and 8 assists in the convincing 75-89 win earlier on in this campaign. A similar showing this week and Lokomotiv will be looking good to progress beyond the Top 16.

It has been a tough campaign for Cedevita

Cedevita haven’t had too much to be pleased about this season but the form of Miro Bilan has definitely had a part to play in their brighter moments. With players like Marko Arapovic, Karlo Zganec and Luka Babic, there is no reason why Cedevita cannot get back on track before too long, but this is down to their spirit and enthusiasm as opposed to experience. They have managed four wins on the road this campaign, so they know what it takes to win games but this has the potential of being a tough and long night for the team from Zagreb if they aren’t at their best.

The hosts are well fancied and it is easy to see why. You can find Lokomotiv Kuban Krasnodar at -13.5, available at odds of 1.90, and this is a good bet for Thursday night. If you are looking to get involved with the Over/Under market, have a look at going OVER 151.5, which you’ll find at odds of 1.90. Bet Now!