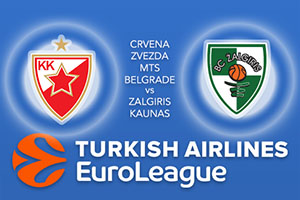 These two sides are in the middle pack of teams in the Euroleague which means that there is a big desire for a victory from both sides. Both of these teams are big names in the Euroleague, and European basketball, but this is only going to be the fifth clash between these two sides. The most recent clashes came two years ago when there were two home wins in the Top 16. Kaunas enjoyed the success in the earlier clashes, which date back to 1999.

The hosts will be keen to win this game but their 2-2 record at home isn’t fantastic and they know they’ll need to improve on this. A lot of teams will be glad to win as many games away from home as they do at home but when you’ve only won 4 of 9 games, that isn’t really the case! The hosts know they are a team that plays with a strong defence but they are up against a team that hasn’t won away from home, so there is a strong incentive to pile the pressure on the away team in this game. Marko Simonovic has provided an average of 12.1 points per game while Marko Guduric, with an average of 10 points per game, is the only other Belgrade player to get into double figures.

Kaunas have been poor in the Euroleague so far

If there is something that will give Kaunas hope in this game it is the fact that they are outscoring the side from Belgrade. The away team comes into this game with an average of 80.1 points per game, compared to an average of 72.9 points per game from the hosts. The key man up top for the away side is Paulius Jankunas who has provided an average of 14 points per game. However, in the last two games, he has chipped in with 26.5 points and 8.5 rebounds so this is a player that is performing heroically well at the moment.

The hosts are favourites and you can take Crvena Zvezda mts Belgrade at -5 which is on offer at odds of 1.90. You can also back the Over/Under market by going OVER 150.5 at odds of 1.90. Bet Now!