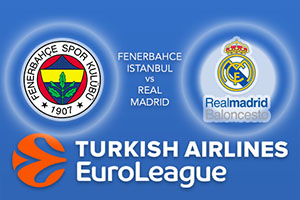 This has the makings of a massive, and hopefully enjoyable, Euroleague match this midweek. The hosts have a 6-3 record while the Spanish side come with a 7-2 record, and both of these teams are near the top of the table, chasing down CSKA Moscow. This is the first time that these two sides have clashed since the Turkish team gained a 3-0 win over Madrid in the Playoffs last season and this may weigh on the minds of the players involved with this clash.

The hosts are doing fine but they need to improve their scoring if they want to go as far as they managed to do last campaign. An average record of 77.1 points per game falls short of what the big teams manage in the Euroleague and it places an awful lot of pressure on the defence. The hosts have won their two most recent games and they’ll look for players like Kostas Sloukas, with an average of 12.8 points per game, and Bobby Dixon, with an average of 12 points per game, to make a difference in this big clash.

While the Spanish side were undone by Fenerbahce last season, they hold the advantage in games between the two sides this century, with an 11-5 record overall. This includes a semi-final win in 2015 when Madrid last to the Euroleague title. Madrid know that they have a high scoring prowess and they have averaged 90.9 points per game this season. They also hold the Euroleague MVP for November with Sergio Llull grabbing that accolade. When you consider he has a 19.4 average for points per game, which is the third highest in the Euroleague, Madrid are going well at the moment.

It may be a difficult game to call as both teams will fancy their chances. You can take Fenerbahce Istanbul at -2, which is provided at odds of 1.90. With the Over/Under market available on all Euroleague games, look to go OVER 167.0 at odds of 1.90 and hope that this game is a cracker. Bet Now!