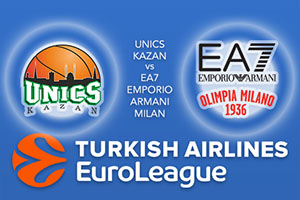 The hosts have lost three games in a row and they will be desperate to snap this run and get back to winning ways. Of course, when you have a 2-7 record for the season, you don’t have that many winning ways to recall from the season and this will be a tough match against Milan. The Italians have been a bit more like their previous self this season and they will view this game as a chance to improve on a 4-5 record which should be higher given some of their play and missed chances in close matches.

While the record doesn’t look great for Unics, they have a few things they can be optimistic about. One of the most important things for the hosts is the presence of the top scorer in the league, Keith Langford. Langford has chipped in with an average of 23 points per game and he is likely to have a big impact on this match. The fact that Langford used to play for Milan is another factor in this game and with neither team having a great defence at the moment, this could be an ideal chance for Langford to grab more points and show his former fans what they are missing at the moment.

Milan need to be more consistent in Euroleague action

The bookies predict a close one with the hosts being favourites but you should take EA7 Emporio Armani Milan at -2.5 which is provided at odds of 1.90. For the Over/under market, go OVER 167.5 at odds of 1.90. Bet Now!