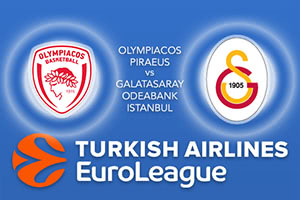 There is a lot of space between these two sides and if this game goes anything close to form, it is the home fans who will be celebrating another victory while the away team will slump away knowing that they have endured a terrible season. The hosts already have a playoff spot in the bag and are very much in contention for home-court advantage, so there is still plenty of incentive left for the Greek side to step up and play in this game. For the Turkish side, there is only pride left and their 8-17 record sees them already officially out of the running for further Euroleague action.

There is the fact that Galatasaray grabbed the victory the last time these sides played, so there is always that to add spice to that clash. That game finished 89-87 in Istanbul, so the Turkish side know that they can beat Olympiacos and the Greek side have revenge in mind when they welcome their Turkish opponents this Friday night. That game was a big night for Sinan Guler, who grabbed 12 assists, a career high for the player, and 4 steals.

Galatasaray have had a bad Euroleague season