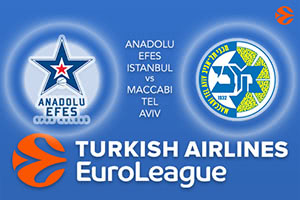 The hosts are currently sat in the final playoff spot in the Euroleague so they know that every game is vital and every home game has to be seen as a chance to build their hopes of making progress in the tournament. The Israeli side are off the pace but while they are not mathematically ruled out of the running for a playoff spot, Maccabi have to keep fighting.

These two teams have met on 11 occasions in the past and it is Maccabi who holds the upper hand with 7 wins in these games. However, when these two sides met earlier on in the season, it was Anadolu Efes Istanbul who came out on top. The Turkish side grabbed a 77-86 win in Tel Aviv and it was a massive night for Derrick Brown, who offered up 22 points on the night.

The Istanbul side has home advantage for this game and they also have the February MVP in their ranks, Thomas Heurtel. Heurtel is likely to be a key player and if he can add to his record of 13.7 points per game and his 6.0 assists per match, the hosts will give themselves a chance of pushing on for that playoff spot. Brown has notched an average of 13.3 points per game so far this season while Bryant Dunston has offered an average of 10.4 points per game for the Turkish team.

Maccabi have a tough task in Euroleague action