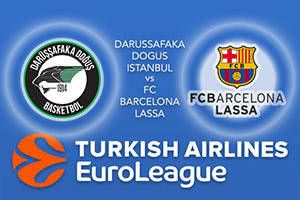 While both of these sides will still believe that they have a chance of enjoying Euroleague playoff this season, it is far more likely that the hosts will push themselves into contention. There was a loss for Darussafaka last week but with a 12-13 record, the Istanbul side is only one win outside of the playoff zone, so there are still reasons to be optimistic about their hopes. The Catalan side have picked up two wins in their three most recent games but with a 10-15 record, they have a lot of work to do, and need other results to go in their favour, before they can be confident about their hopes of extending their European adventures this year.

When the teams met earlier in the season, it was Barcelona who grabbed an 81-77 victory, with Ante Tomic picking up 16 points without missing a shot. There have been big changes to these teams since then, with Ante Zizic, who made his debut for Darussafaka in the game, now playing a key role for the hosts. Barcelona have suffered further injuries since then and the absence of Justin Doellman and Juan Carlos Navarro have blighted the Catalan’s club usual sense of style and swagger.

Barcelona are desperate for Euroleague wins

It is clear that both of these teams are looking to win this game, and it could be as close as the earlier clash between the sides this season. However, the hosts are in a stronger place and Barcelona have been inconsistent, so back Darussafaka Dogus Istanbul at -4.5, at odds of 1.90. if you are looking for the Over/Under market, go OVER 151.0 at odds of 1.90. Bet Now!