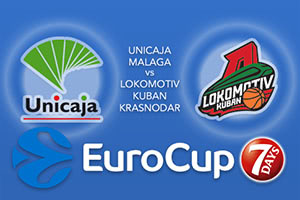 This Friday night sees the second games in the EuroCup semi-finals and when you consider that we are dealing with a best of three series, there could be a lot to look out for in these two games. The game in Spain sees Malaga hoping for a home win that will end the series and place them into the final of the EuroCup. The team from Krasnodar needs to put their home defeat behind them and bounce back very quickly or their EuroCup campaign will draw to a close at the semi-final stage.

We should be in for quite a night and we have this mouth-watering clash in store thanks to a stunning second half from Unicaja Malaga on Tuesday. There was a 0-11 scoring run that crossed over the third and fourth quarters and in the end, the Spaniards pulled away for a massive 57-73 victory. This was a big night and with Jeff Brooks grabbing 18points in the win and Kyle Fogg offering 15 points in the triumph, there are many Malaga players who can be very pleased with themselves after that victory. Of course, it all starts again on Friday so there is no point in looking back.

For Lokomotiv, Kevin Jones grabbed 17 points in the loss while Taylor Rochestie provided 14 points and 6 assists. In the lead-up to this clash, there was a lot of focus on the quality of Krasnodar’s defence, but Malaga were stronger all over the court, and put a lockdown on the Russian side after the opening quarter. There was disappointment for Mardy Collins in the initial game of the series because he only managed 4 points in just under half an hour of action. Collins had provided an average of 11.7 points per game and 5.7 rebounds per game but he failed to show this talent when it mattered. Of course, Friday night is another chance for Collins to make his mark on the game.

Both teams need to win but the hosts will be fired up with the chance to book a final spot in front of their own fans. Back Unicaja Malaga at -3, which you can find at odds of 1.90. When it comes to the Over/Under market, go UNDER 145.5 at odds of 1.90. Bet Now!