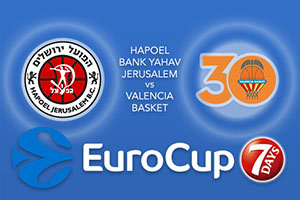 After Tuesday night’s game ended in a win for Valencia, the home fans on Friday night will be desperate for any sort of victory for their side. In a best of three game series, the second match is crucial and while Hapoel has home advantage, they will be carrying a great deal of stress and pressure heading into this game. One more defeat and it is all over so the Hapoel Bank Yahav Jerusalem players have to be brave because if they aren’t, Valencia will be booking their place in the EuroCup final before the weekend kicks into gear.

The opening game of the series was an interesting one but Valencia seized control late on and won the game by an 83-68 score line. The MVP of the game was Fernando San Emetrio and he grabbed 21 points in the win, a career high for the player in the EuroCup, but 11 of those points came very late on. This gave his side a massive boost and ensured that Valencia got their noses in front before the second game of the series. Bojan Dubjlevic was also in fine form for the Spaniards in that game, offering 11 points and 10 rebounds in the victory. With Valencia not being able to call on Guillem Vives and Antoine Diot, some thought they would struggled but Sam Van Rossom and Rafa Martinez stepped up and made a difference.

Valencia can see out the EuroCup semi on Friday

While San Emeterio was the MVP in the game, he wasn’t the player who bagged the most points, that was Tarence Kinsey with 22 points in the loss for Hapoel. Curtis Jerrells offered up 13 points and 5 assists in the loss while Amar’e Stoudemire provided 10 points and 8 rebounds in the defeat. The series moves to the Pais Arena Jerusalem and it has been a happy hunting ground for the hosts so far in European competition, with a 7-1 record. Mind you, that single defeat came at the hands of Valencia with the Spaniards winning 84-86 back in the regular season.