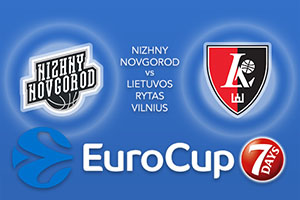 The hosts hold a 1-1 record, a record they will look to improve on when they welcome Lietuvos Rytas Vilnius on Tuesday night. The away side have a 0-2 record, so are looking for their first win of this stage of the campaign, and this is the first time that these two sides have met in European competition. A win will do the victor a power of good so you can expect these two sides to be going at it with everything they have.