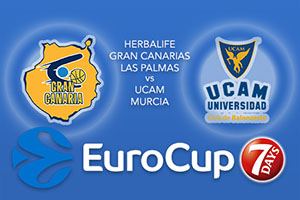 Before Group E got underway, many people classed Gran Canaria as favourites to top the group but things have not fallen in their direction so far. The Spanish side have lost their opening two games of this stage of the season and they will have another tough tie this week as they take on domestic rivals. UCAM Murcia arrives with a 1-1 record and although these two teams know each other inside out from their domestic duties, this is the first time they will have clashed in European action.

The 7-1 record that Gran Canaria built in the regular season seems so long ago. The hosts know that they have to grab a win very quickly or their hopes of progressing in the tournament will be beyond them. This means that there will be a level of expectation place on Kyle Kuric as he has been a key player for Gran Canaria this campaign. Kuric has offered an average of 17 points per game so far this season, a tally that has to be built on in this game to give the hosts a chance. There has also been a strong level of support from Royce O’Neal, who has provided an average of 10.4 points per game and 5.5 rebounds per game, while Bo McCalenn has chipped in with an average of 9.7 points per game for the hosts.

Murcia need a win of their own in EuroCup action

UCAM lost out in the EuroCup last week but a bigger loss may have happened this week. This is because Vitor Faverani, who had averaged 11 points per game this season has been transferred to FC Barcelona Lassa. The Catalonians need to spark their own European form in the Euroleague but this is a big loss for Murcia. There will be a higher level of focus placed on Facundo Campazzo, who has offered an average of 14.7 points per game and an average of 7.1 assists per game. Billy Baron has also been a key player, providing an average of 12.6 points per game.