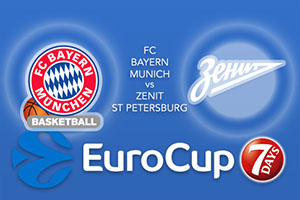 The first time these two sides clashed came at the start of the season in a game that Zenit St Petersburg edged 80-77. The second clash takes place this week and ever since that opening day defeat, FC Bayern Munich have gone on a winning run which sees them hold a 3-1 record, which sees them sharing top spot in the group. Zenit have a 2-2 record but they know a win in Munich will see them go above the Germans thanks to the head to the head record.

Zenit want another big win in the Eurocup

The hosts are the favourites for this clash and you can take FC Bayern Munich at -6.5, available at odds of 1.90. Anyone looking for the Over/Under market for this Group C Eurocup game will find that going OVER 162.5 at odds of 1.90 is a smart bet. Bet Now!