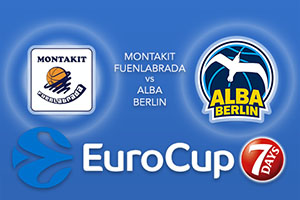 The first game of the season for these two sides in Group B in the Eurocup was also the first time the two sides have clashed. It ended in an 88-81 win for the Berlin side with Elmedin Kikanovic offering up a stunning 25 points and 6 rebounds. The hosts won their next two games after that loss but suffered defeat in their most recent game, leaving them with a 2-2 record.

With the Germans holding a 3-2 record, a home win in this game will draw the teams level of records and could give the hosts the chance to sneak ahead of their opponents. There is a need to play with desire but also with brains, and this is where the experience of veteran player Marko Popovic may make a massive difference. He has delivered an average of 17.3 points per game this season, and if he can continue this run of form in this game, Montakit will be feeling a lot better about life. Ivan Paunic has also been a big player this season, averaging 11.3 points per game and Moussa Diagne has provided an average of 10 points per game.

ALBA Berlin are doing well in the Eurocup