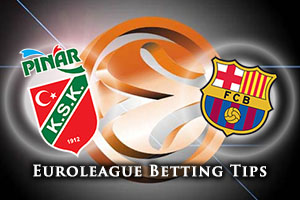 With a tip-off time of 17:00, this is the first game of the 2015/16 Euroleague season and it is the first time that Pinar Karsiyaka Izmir will play in the Euroleague. They couldn’t have asked for a bigger or better game to start with as they welcome the Catalonian giants, FC Barcelona Lassa to Turkey.

The Turkish champions could see a total of 6 players making their Euroleague debut in this game but they do have players who have experience of the top flight in European basketball. Kenan Siphani grabbed 5 assists against Barcelona last season for Euroleague career high and his efforts helped Fenerbahce Istanbul to an 89-91 OT away win against the Catalan club. Joe Ragland can also call on big-club experience as he was with EA7 Emporio Armani Milan last season, where he was a team-mate of Samardo Samuels, who is with Barcelona for this season.

Barca have a new look about them

Barcelona may be a team well-versed to life in the Euroleague but they look set to have a number of players making their Euroleague debut in this game. Aleksandar Vezenkov, Emir Sulejmanovic, Marcus Eriksson and Moussa Diagne could all get their first action of top flight club basketball in Europe this week. Carlos Arroyo has been brought in from Galatasaray this summer and he will add another dimension to the Barcelona side that will be reeling from major rivals Real Madrid lifting the Euroleague title last season. Juan Carlos Navarro looks set to still be a massive player for the Catalan club this season.