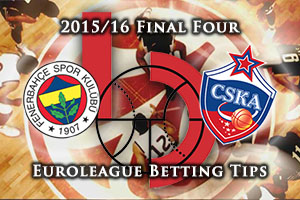 The climax of the 2015/16 Euroleague season comes on Sunday evening when Fenerbahce Istanbul takes on CSKA Moscow in Berlin. Fenerbahce hope to become the first ever Turkish team to win this title while CSKA Moscow are looking to pick up their seventh Euroleague title. However, the Russian side haven’t triumphed since 2008 but they have lost out in finals in 2009 and 2012. That 2009 loss was in Berlin, so they’ll be looking to wipe away the memories of that loss in this great city this weekend.

One player that could make a massive difference for the Turkish side in the Final is Kostas Sloukas. Sloukas has won the Euroleague two times in his career and his experience could be a deciding factor in this game. It remains to be seen what impact Friday night’s overtime session had on the Turkish side, but this is the sort of occasion where adrenaline kicks in and players can play through the tiredness. There is also the chance to commit history, which is something else that can provide players with added impetus and motivation in these sort of situations.

CSKA Moscow have a lot in their favour

There are a number of things in the favour of CSKA Moscow and the fact that they are the best scoring team in the Euroleague, with a 90.6 points per game average, has a lot to do with any optimism the Moscow side has going into this game. This is no surprise with the MVP for the Euroleague, Nando De Colo, in the side and of course, Milos Teodosic pulling the strings for the Russian side. If these two players manage to hit form in the Final, there is a very good chance that CSKA Moscow will be celebrating long and hard into the evening on Sunday in Berlin.

The two coaches have a shared history at Panathinaikos, during a time when the Greek team tasted success in the Euroleague, so there is some good guidance coming down from the top of both teams.