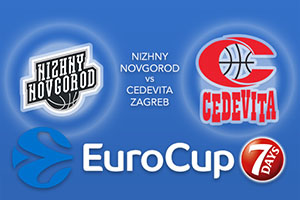 With all of the qualification spots for the Top 16 sorted out, you may think that the Eurocup is going to be a slightly drab affair this week. This isn’t the case though as this Group A match shows. Second spot in the group is up for grabs in this clash in Russia and we could be in line for a thrilling game with some decent basketball betting action in store.

The hosts know that they have to win by more than 15 points to claim second place. It is going to be a tall order but at least they have a set goal in mind. When the two sides clashed earlier this season in Zagreb, Cedevita won by 92-77 which has created the high barrier for Nizhny in this game. However, Nizhny have some decent players with DeAndre Kane and Ivan Strebkov both featuring in the Top 10 of the Performance Index Rating. Having triumphed in their two most recent games, Nizhny have at least given themselves a chance of qualification. Strebkov has picked up an average of 17 points per game this season while Kane has offered an average of 16 points per game.

Cedevita Zagreb have the upper hand for this Eurocup clash

For the side from Zagreb, a win will place them into second place so they have all the incentive they need for a strong showing in this game. However, they also know that if they lose by 15 points or less, they will also claim second showing, which gives them a bit of leeway which could go against them. When teams are unsure of what to do for the best, they can be caught in two minds, which may see Cedevita on the back foot slightly protecting their lead as opposed to going to kill the game off. Miro Bilan has picked an average of 13.9 points per game this season and he is the only player on the away side who has managed to break into double figures.