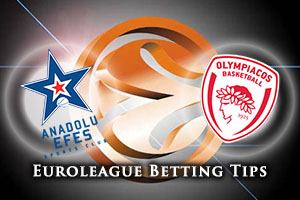 In this clash between two teams who a great history in the Euroleague, the final result could have a big impact on who makes their way to the Top 16. This game marks the halfway point of the regular season and with the hosts on a 2-2 record and the away team sitting with a 3-1 record, there is a lot up for grabs.

Losing their last two games has turned the Anadolu season upside down after they made a flying start. There is still plenty of time to turn things around but this tough test against the Greek giants could have been less challenging if the Turkish side had been stronger in the last fortnight. Thomas Huertel has been on fine form this season, offering up an average of 8.5 assists per game, making him the Euroleague leader after 4 games. Jon Diebler has bene in good form this season for the hosts but it may be time for Cedi Osman to step up and take some of the pressure off him.

The Greeks head to Turkey in fine form but they’ll be out to ruin the night of a man that game them many happy memories. Efes coach Ivkovic has managed the Greek team on two occasions lasting five seasons and he led them to two Euroleague titles. That will all be in the past though and Georgios Printezis will be looking to maintain his fine form of the campaign. Vassilis Spanoulis is yet to fire into life but you get the feeling that a magical performance isn’t too far away and once he gets going, there is very little stopping him.

The bookmakers think that this will be a tight game and taking Olympiacos Piraeus with a +2 handicap, at odds of 1.90, is likely to be of benefit on Thursday night. If you are looking to take advantage of the Over/under market, look to go UNDER 151.0 at odds of 1.90 in what could be a tense and tight game. Bet Now!