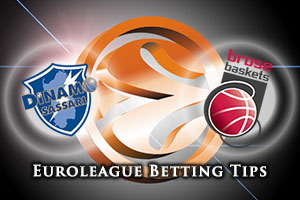 The hosts come into this game with a 0-4 record and they know that if they want to remain in the running for Top 16 spot, they will have to start winning very soon. Coming up against an opponent that holds a 2-2 record for the season so far may provide them with that opportunity.

The hosts are strong and athletic, with players like Brent Petway, Jarvis Varnado and Joe Alexander allowing them to impose themselves on their opponents. The problem for the hosts comes with the fact that they have been quite weak defensively at times and this is something that they need to work on. Going into Round 5, Dinmao are ranked second with respect to points allowed, with an average of 87.2 points per game given up. You can’t allow that sort of leeway to opponents in the Euroleague and expect to win many games. The home crowd will be desperate to cheer a win but the players need to be the difference on the night.

Can Bamberg grab an away win?

The away team will be looking to grab their first road win of the season and in all honesty, they are unlikely to find a better opportunity than the one that awaits them on Friday evening. Bamberg managed a massive win against Tel Aviv and this was largely down to the role of Daniel Theis who grabbed 16 points and Nicolo Melli who managed to serve up 10 assists. This is exactly the sort of star performance that the Germans will need to win this game but if they do manage a similar performance to the one that defeated Maccabi, it could be a long night for the home team.

The bookies don’t think that there is a lot between these two teams but the away team just has the edge. This is why taking Dinamo Banco di Sardegna Sassari at +1.5, at odds of 1.90, is likely to be a decent bet for Friday evening. For the Over/Under market, look to go OVER 155.5 which you will find at odds of 1.90. Bet Now!