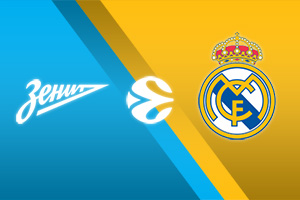 Last week in Barcelona, Zenit (currently at 3-2) played their worst game in the three-year presence in the Euroleague; they were humiliated by Sarunas Jasikevicius’s team, losing hands down (84-58). In other words, Zenit did not remind much of the team that claimed the qualification to the Final – 4 just a few months ago and only lost it in details (they won one game in Palau Blaugrana and lost another in overtime).

The truth is that Zenit is not the same team as last year. And that is because they lack the personality that Kevin Pangos gave them while he played there. But the 28-years old Canadian moved to the NBA to play for the Cleveland Cavaliers, leaving a considerable gap behind. At the same time, the highest quality guard of Xavi Pascual’s team, American playmaker Sabazz Napier, has been out of action for almost a month now.

Real (4-1) escaped Fenerbahce last week due to their excellent defence and the 17 rebounds collected by the French center Vincent Poirier (he replaced deservedly Tavares, who was absent/became a father). Tavares returned on Sunday, but Real lost 70-75 to Gran Canaria (at home) for ACB. After that, it seems they ran out of energy. Except for point guard Williams-Goss, who is injured, leader Sergio Llull is doubtful for tonight’s game.