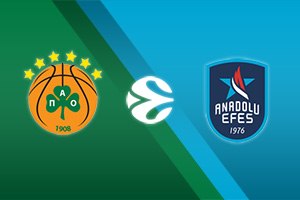 Last week, Panathinaikos (1-4) found themselves losing 64-44 to Maccabi after 32 minutes of play in Tel Aviv. The Greens played something like basketball and looked like easy prey for the Israelis. However, in the last 8 minutes of the game, they scored 29 points, taking advantage of the relaxation of the Israelis. They managed to bring the game to 73-72 with just 30’’ to go, but they left empty-handed (77-73) because of several bad decisions at the end.

In the Greek Basket League, they entered the game against Peristeri very relaxed and only played like champions after the first quarter. Nevertheless, they eventually won 77-62. Unfortunately, in that match, important forward Papapetrou was injured (14.8 points, 4 rebounds, 3 assists) and his participation tonight is doubtful. The same for valuable forward Okaro White, who suffers from calf discomfort.

Efes (1-4) finally managed their first victory in this year’s Euroleague. The titleholder overcame the resistance of Unics Kazan with great difficulty to reach the final 71-68. However, absences are many and essential for Ergin Ataman ahead of today’s game in Athens. Serbian guard and last year’s Euroleague MVP, Misic, travelled with the Turkish team, but his participation will be decided at the last minute. Also, Ataman cant count on Dunston (C), James Anderson (SG), Balbay (G), while it is also doubtful that Simon will make it.