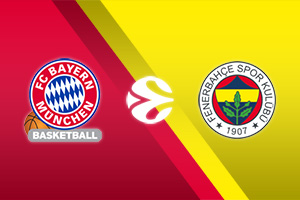 Last week, Bayern took some steps back after experiencing a 94-71 defeat by Monaco in the Principality. The Bavarians fell to 3-6 and urgently need a good Devil Week to recover and get back in shape. They face Fener first, and then they host Panathinaikos in Munich, hoping that they will come out with two victories at the end. In the German Cup, they played against Chemnitz (on the road) and lost 85-80, with Andrea Trinchieri taking full responsibility for the defeat, which eliminated them from the Final – 4. The Italian coach still does not count on the veteran German international forward Paul Zipser and the tall Croatian Leon Radocevic.

Fenerbahce (3-6) wrote a negative page in their history in the Euroleague, after a miserable performance and the loss at home by Armani Milan. The Turks were destroyed by the team of Ettore Messina, scoring only 3 points in the first quarter (3-22). They scored a total of 43 points in their worst performance in the history of the Euroleague and 2nd worst overall for a home team! The final score 43-68 is the best evidence! However, in the Turkish championship, they defeated a weak Merzefendi at home 85-77, with coach Sasa Djordjevic resting many of his key players. Preparation for tonight’s match in Munich has ended without any unpleasant surprises.