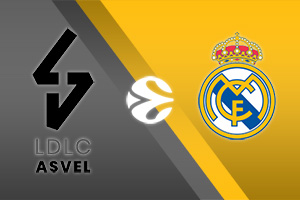 Villeurbanne was worse than expected in its match against the Crvena Zvezda in Belgrade last week. The French scored just 9 points in the first quarter, never found a rhythm and lost 73-67 without threatening the Serbs for a single moment. Thus, they fell to 6-3 but remain in the first 8 of the ranking and still hope they can qualify to the playoffs.

Villeurbanne faced a strong Burg in the French league and won 85-77 at home, with guards Jones and Okobo offering yet another outstanding performance. Coach T J Parker keeps facing significant problems: key forward Lighty (10 points, 3.3 rebounds average) will be out for two months, American center Raymar Morgan is permanently out, while French international guard Diot cannot be counted (he is injured). In addition, talented tall Wembanyama will be out for at least another two weeks. However, Villeurbanne signed quality scorer Marcos Knight just a few hours ago. The 32-year-old American forward had an excellent season with the Monaco jersey last year.

Real comes from a comfortable victory over Zalgiris (95-82, at home), but the Galacticos did not play well, according to their coach Pablo Laso. The Madrilenians, however, reached a 7-2 record and remained in 2nd place along with Barcelona. They played on the road against Fuenlabrada in the Spanish league and won 88-85, with six players scoring double-digit points. Injured American guard Williams-Goss (7.6 points, 2.6 assists average) is highly doubtful tonight. Anthony Randolph is permanently out, while at least Trey Thompkins has returned to training.