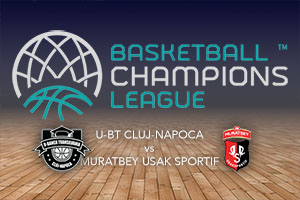 The first leg tie between these two teams was one of the most exciting games of Tuesday night and there is no reason to suggest Thursday night will be anything different. After all, both of these teams are in the hunt for a spot in the FIBA Champions League, which means that there will be no shortage of will or effort in this game.

This was a narrow win for the Turkish side and while they will be delighted that they have a lead to take to Romania on Thursday evening, they will rue the fact that the gap wasn’t wider. This is because Cluj managed to score a massive 38 points in the last 13 minutes of the game, which means that we are in for a very exciting affair in the second leg.

The final score in the opening leg was:

In the second quarter, a 6-0 scoring run pushed the hosts into a double digit-lead. This was a position they would hold in a comfortable manner until with just over 13 minutes to go, the score was 62-52 for the home team.

Filip Adamovic and Kyndall Dykes led the fightback and at one point, it looked as though the away team would grab a win. They managed to edge ahead by three points, at 78-81, thanks to a jump-shot from Vlad Moldoveanu but the hosts soon got a grip and both teams traded blows until the end of the game.

Mark Lyons delivered 24 points for the winners while the away team were boosted by 22 points each from Aleksandar Rasic and Dykes. If we get the same sort of high scoring action on Thursday night, it will be a thrilling evening.

The bookies find it hard to split these teams and they make the Turkish tem favourites to get through to the FIBA Champions League. Taking U-BT Cluj Napoca at +1.5, available at odds of 1.83, may not be enough to see them through but it should provide you with plenty of involvement and drama. For the Over/Under market, go OVER 154.5 which you can find at odds of 1.83.

Have a look at our Basketball Odds and Lines page, where you can keep track of the history of the U-BT Cluj-Napoca v Muratbey Usak Sportif odds, as well as compare the offers from different sports betting sites.