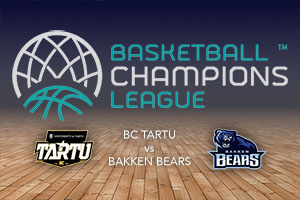 A spot in Group A of the regular season in the 2016/17 FIBA Champions League is the prize that is up for grabs in this tie. The Estonian side booked their place in the second qualifying round thanks to a narrow win over the Dutch champions Donar from Groningen while the Danish champions Bakken made their way directly to this stage of the competition.

A draw in Holland was followed by a steady yet unremarkable win in the second leg to get BC Tartu to this stage, and it may be that the team isn’t up to full-power yet. The two low scoring games against the Dutch side would suggest that this is a team still looking to find their rhythm and having the first leg at home will force Tartu to lead with a bit more power and aggression. The hosts know that if they let this game pass them by, they may be waving goodbye to their Champions League hopes for the 2016/17 season.

The Danish side have European expertise to call on

The Danish side were involved in the FIBA Europe Cup last season, and it showed that they can change things up a bit. Bakken are one of the stronger forces in the Danish league and the games there are usually fast, open and packed with point scoring opportunities. That is fine for the domestic campaign but the Bears know that a different approach is required when it comes to European competition. This means you should them expect them to try and player a more deliberate tempo in this game, which could help them settle and disrupt the attacking efforts of the home side.

The bookmakers are making BC Tartu the big favourites to take a decent lead into the second leg in Denmark on Thursday night. With this in mind, taking BC Tartu at -7.5, which you can find at odds of 1.83, is likely to make the evening interesting. This may be a cagey affair with neither team wanting to be out of the running before the first game is complete, which means for the Over/Under market you should go UNDER 156.0 which you can find available at odds of 1.83. Bet Now!

Have a look at our Basketball Odds and Lines page, where you can keep track of the history of the BC Tartu v Bakken Bears odds, as well as compare the offers from different sports betting sites.