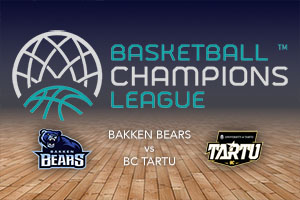 With the second leg games in the Qualification Round 2 ties for the FIBA Basketball Champions League coming so fast after the opening leg, there will still be a lot of tired and sore players on the court. However, with so much at stake, you know that both teams will try their best to bounce back as strongly as possible.

The hosts got off to a flying start and it looked as though the Estonian side were going to cause a bit of a shock in this game. The fact that the hosts were in a 23-9 lead just before the end of the opening quarter lets you know what sort of start they made, and how sluggish a start the Danish side made.

Perhaps the travel got to the Bakken Bears from Aarhus but they eventually got into their stride and grabbed a big away day win that leaves them in the driving seat for the second leg of this Qualification Round 2 tie.

The final score in the opening leg was:

The Danish side hit peak form in the third quarter and a 13-2 scoring run allowed them to take the lead by a score of 62-50. Many in the crowd believed that the away team would see the game out comfortably but there was a revival from the hosts and dramatically, they got back in the lead with just over 5 minutes remaining. This saw Tartu ahead by 65 – 63 but a 6-0 scoring run put the Danish team back in control and they held on for an 8 point lead.

Michael Diouf provided 18 points and 9 rebounds for the victors with Devaughn Akoon-Purcell providing 14 points in the win. The hosts were boosted by 15 points and 17 rebounds from Venky Jois.

Have a look at our Basketball Odds and Lines page, where you can keep track of the history of the Bakken Bears v BC Tartu odds, as well as compare the offers from different sports betting sites.