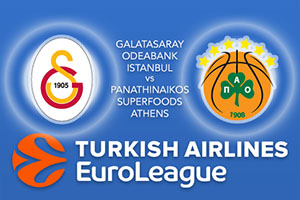 These two teams have very different reasons to grab a victory in this game. The hosts obviously have home advantage in this game but their record won’t give their fans much confidence. It has been a very difficult season for Galatasaray this season and their 6-14 record is indicative of the difficulties they have endured, even if things have been slightly brighter in recent weeks. The Greek side is in a stronger position, holding an 11-9 record but their away form hasn’t been too impressive of late.

When it comes to all-time meetings between these sides, it is the Greeks who have the upper hand, having won all three clashes of these teams. In the game between these sides earlier on in the season, the match finished 85-58 to the Greeks and they’ll look to replicate that result in Istanbul on Friday evening.

While both sides will fancy their chances of winning this match, the away side looks strong. Take Panathinaikos Superfoods Athens at -2.5, at odds of 1.90. If you’re looking at the Over/Under market, go UNDER 157.5 at odds of 1.90. Bet Now!