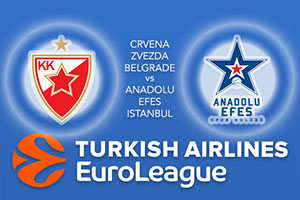 If you were asked to name a team that would go on a hot streak of 7 wins in a row, it is unlikely that Crvena Zvezda mts Belgrade would be that side. The hosts have a 12-8 record at this stage of the season but they are currently sweeping all before them at the moment. A home game is always a good chance to continue their run of form and with the Istanbul side travelling with a 9-11 record; hopes will be high amongst the home fans.

Mind you, when these teams clashed earlier on in the season, it was Efes who picked up with victory. The home fans were delighted with a 100-79 win back in Round 9, and Derrick Brown was the star man for the Istanbul side. Brown offered 100-79 points in this game, which was a comprehensive victory for Anadolu. This will surely give the away team some confidence heading into this game but the home fans will create a noisy atmosphere.

At this moment it seems unwise to bet against the hosts, even though all runs have to end sometime. Take Crvena Zvezda mts Belgrade at -4.5 at odds of 1.90. For the Over/Under market, look to go OVER 155.5 at odds of 1.90. Bet Now!