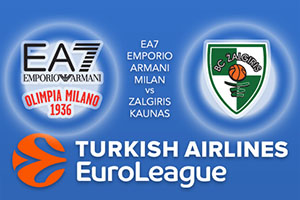 This will be the tenth meeting between these sides in European competition and it is the side from Kaunas that holds a slight edge. Zalgiris are currently 5-4 in overall record and they have a 5-7 record for the season so far in the Euroleague. However, Milan are on a very bad run and their 4-10 contains a losing streak of seven games, which includes three home losses. Milan need to turn their fortunes around before the start of 2017 if they are to hold any hopes of enjoying life beyond the regular season.

One thing that will lift Milan coming into this game is the fact that they are currently the fourth top scorers in the Euroleague with an average of 82.6 points per game. They also know that Kaunas are the lowest away side to have visited Milan in a while so this could be their chance to grab something that will help them to lift the spirits before New Year. Rakim Sanders has been a shining light for the hosts and he has offered an average of 14.3 points per game while Ricky Hickman has provided an average of 10.2 points per game for the Italians. Milan know that they need to get out of this losing streak very quickly and this could be their best chance.

Kaunas come into this match after a very disappointing home loss, so they are unlikely to be in the best of moods themselves, but there is a very good chance that they’ll see this as an away game that they can. The Kaunas offensive form isn’t too bad, they are currently fifth top scorers in the Euroleague and in Paulius Jankunas, Zalgiris Kaunas have a player who holds an average of 13.4 points per game and an average of 5.9 rebounds per game. Brock Motum has also been a key player for Zalgiris with an average of 13.1 points per game.