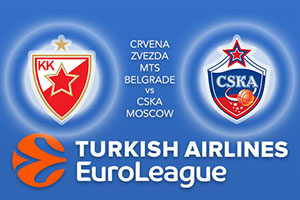 The hosts are well known for pulling off a few shocks in their time but their hopes of pulling off a major surprise this week have probably been diminished by what happened last week in the Euroleague. The Belgrade side holds a 6-8 record and they welcome reigning Euroleague champions CSKA Moscow, who hold a 12-2 record, on Thursday night. However, the fact that the Russian side lost week probably means that they’ll be even more fired up to get a win in this game.

While most of the focus on last week’s games fell on CSKA falling, there was a big win for Crvena as they defeated Real Madrid. That is something to be proud of and it is likely that the Belgrade side will have confidence coming into this game. They also have the second-best defence in the Euroleague, giving up an average of 75 points per game, and this is something that will be pushed to the limits on Thursday night. Scoring points has been slightly trickier for the hosts and they only have one player who is in double figures for the season so far. Marko Simonovic has offered an average of 12.6 points per game this season and he will be a vital player in this game. Then again, Ognen Kuzmic has provided an average of 8 rebounds per game this season, and he’ll have a big role to play.

CSKA Moscow need to bounce back in Euroleague