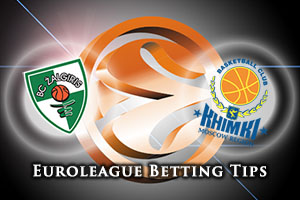 The hosts may be at the foot of the table with a 2-9 record but such is the open-nature of Group F, Khimki still find themselves in the playoff race. The Moscow side has a 5-6 record and they sit in 5th place. This is just outside of the playoff places but the two teams above them have just one win more, so there is a lot to play for.

While there are many reasons surrounding the poor performance of Kaunas this campaign, the fact that they are rated second bottom with respect to scoring is a huge factor. When you average 71.9 points per game, you are going to find it very difficult to grab points and work your way up the table. Kaunas may be playing for pride but considering they were thrashed by Khimki the last time these two sides clashed, you should find that there is plenty of motivation for the Zalgiris players to deliver a show for their fans. The home fans will attend in hope rather than expectation.

The away team will be coming into this game under Dusko Ivanovic for the second time and they know a win will project them back into the playoff race. It has been a good Top 16 so far for the Moscow side. They lead with respect to assists, 20.8 assists per game, they lead with steals, an average of 8.6 steals per game and they are currently ranked second with respect to scoring, with an average of 83.6 points per game. These aspects should combine to place the Moscow side at the top end of the group and they’ll be looking for a similar result to the last time they played Kaunas. On that night, the game finished 111-80 to Khimki Moscow.