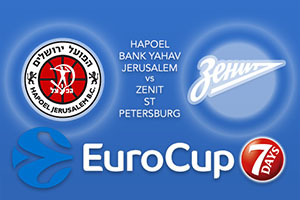 Both of these teams have a 2-1 record and are the joint leaders in Group G in the EuroCup at this stage of the season. With both of these teams meeting last week, it is a fast turnaround from the first ever clash between these sides and Zenit come in great spirits having triumphed by a score of 101-81. Ryan Toolson was the key player in that game offering 28 points while Amare Stoudemire was also impressive, providing 22 points in the loss.

Zenit are enjoying the EuroCup

Hapoel need to be stronger in defence this week as Zenit managed to grab at least 22 points in each quarter, which is going to hurt any team. Zenit have a great scoring record this season, offering an average of 90.5 points per game, and this could be a key factor of this game.

The bookies are struggling to split these teams so take Zenit St Petersburg at -1.5 which you can find at odds of 1.90. When it comes to the Over/Under market, look to go OVER 174.5 at odds of 1.90. Bet Now!