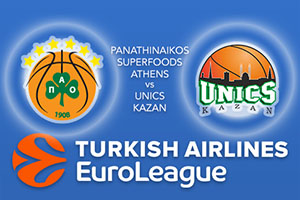 While both of these teams will be desperate for a win on Friday night in the Euroleague, there is a very different mood between the two camps. The hosts have a 13-9 record and barring a disaster they should be okay for a playoff spot once the regular season comes to a close. The Russian come arrive in Greece with a 7-15 record and they know that they need wins quickly if they are to have any chance of bagging a playoff spot. At the moment though, moving away from the foot of the table is the bigger priority for Kazan.

These teams have only met three times in European action and it is Unics Kazan that holds the lead with a 1-2 record. This includes a win in the clash between these teams earlier on in this season, in a game that finished 83-81. There was last minute heartache for the Greeks when Demetris Nichols missed the final shot of the game, which would have seen the game move into overtime. As you’d expect, Keith Langford was the main man that evening, offering 27 points for the winners while Nick Calathes provided 23 points for the losing side.

Kazan have a lot to do in the Euroleague

The Greeks have a number of players who can bag points with Mike James leading the way with an average of 14.2 points per game. KC Rivers offers an average of 11.4 points, as does Chris Singleton. These are the players the home fans will look towards on Friday night in the Euroleague.