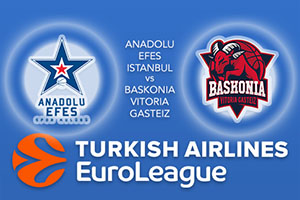 This is a big Euroleague clash between two teams who are delicately placed in the race for the playoffs. In fact, these two teams are in the final two teams so the losing side is going to be at a disadvantage as we move towards the end of the regular season. As the Turkish side have the slightly poorer record of the two teams, they’ll be desperate to grab the win.

The teams have met on 13 occasions so in European competition and it is the Spanish side who has a slim lead, holding a 6-7 record going into this game. That lead is courtesy of the most recent game between the sides when the match finished 85-84 in a fame that was decided by a free throw from Toko Shengelia. Andrea Bargnani had an absolutely astounding game, offering up 26 points in the triumph while Derrick Brown managed to offer 16 for Efes in the loss.

Baskonia will be out for revenge in this Euroleague game

The hosts will be desperate to get revenge for that defeat and one player who has an extra level of motivation for success in this clash is Thomas Huertel. Heurtel has been in excellent form, offering an average of 13.8 points per game but he is also an ex-player of Gasteiz, so he will be especially keen to do the business in this clash. Derrick Brown has provided an average of 12.9 points per game so far this season for the Turkish side.