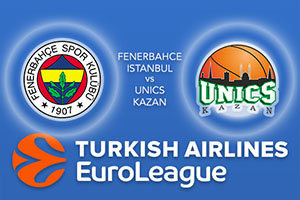 With the home team coming into this game with a 4-0 record and the away team carrying a 0-4 record, it is easy to assume how this game will go. There is definitely every incentive on offer for the Turkish side to make it five wins in a row to start to their campaign but it may not be as simple as they think.

While having four wins under their belt is something that the home team will be pleased with, they know that two of these wins have been achieved with a single point margin. This means that the Turkish side aren’t destroying their opponents and they have come through some sticky moments. This does show that they have battling qualities though. They also have Ekpe Udoh, with an average of 14 points per game, Bogdan Bogdanovic with 13 points per game and Bobby Dixon who has provided an average of 12 points per game. Fenerbahce are looking good across the board and they’ll think they have enough to grab another win in this game.

Can the team from Kazan grab their opening win of the campaign?

UNICS have lost all four games but they have been in the lead at various times, so they are not too far away from turning things around. Their shortcomings will be annoying the team though and Keith Langford will be feeling very aggrieved at the lack of a win in their last game. He managed to provide 36 points in the last match, but coming up against CSKA Moscow, this wasn’t enough to grab a victory. Langford has averaged 24 points this season, a return that is almost 5 points more than any other player in the Euroleague. Quino Colom, with an average of 11 points per game and Artsiom Parakhouski with an average of 10 points per game also have the ability to hurt opponents.