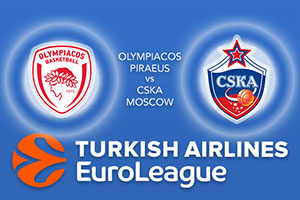 With Fenerbahce falling on Wednesday night, the only 100% record in the Euroleague is on the line in Greece and Olympiacos have the chance to burst the bubble of the reigning champions. It will be a tough task as the Moscow side have an invincible look about them at times but every so often, the Euroleague serves up magical moments, will Thursday night see one of those moments?

While a lot of the focus falls on the form of CSKA Moscow coming into this game, it shouldn’t be overlooked that the hosts are currently 3-1 for the campaign so far. If anyone is going to topple CSKA Moscow, you would say that Olympiacos stand a very good chance of doing so, which means this could be a game that is well worth looking out for this midweek. If there is one player that is going to harm the champions, it is Vassilis Spanoulis, a player who has averaged 15 points per game this season and a player who has hurt the Russians on many occasions over the years. Another key player for Olympiacos is Matt Lojeski, who has averaged 12 points per game this season.

The champions are in for a tough test in Greece

The Russians have a 14-7 record against Olympiacos and they enjoyed a clean sweep in the Top 16 games last season on their road to victory. However, CSKA have struggled against Olympiacos in the past and this game in Greece will be one of the sternest tests of the season for the Moscow side. Of course, when you have players like Nando De Colo, offering an average of 19.8 points per game and Milos Teodosic, providing an average of 14 points a game and 9.5 assists a match, you have the players that can deal with highly pressurised situations.

Everyone knows this is going to be a tight game between two huge sides in the Euroleague but you have to back the champions to just edge it. Look to take CSKA Moscow at -2, which is available at odds of 1.90. Anyone looking at the Over/Under market will find that going OVER 170.5, on offer at odds of 1.90, is likely to provide a reward. Bet Now!