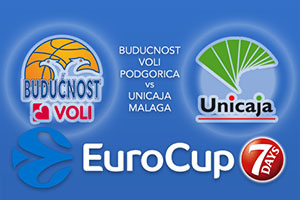 There is a bit of history being made in the Eurocup with this game as Unicaja Malaga make their bow in the tournament. This isn’t their first game in Podgorica though because they were here back in 2002, so this isn’t totally new territory for the side in what should hopefully be a decent game.

The hosts lost out on their opening game last week, going down in Murcia, but it wasn’t all bad news in the game. This is because Boris Savovic managed to grab a double-double, and if he can manage the same again, it is definitely something that will boost the hosts. His 22 points and 11 rebounds were a big boost for the side last week and there was also 26 points from Shawn James and Bojan Subotic. This indicates that Buducnost can grab points, and they’ll be looking to show this skill at home in this game, and hopefully get some points on the board.

The Spanish side have been involved with the Euroleague for a number of seasons but this time, Unicaja Malaga will make their bow in the Eurocup. The head coach of the Spanish side, Joan Plaza, knows what this tournament is all about and he has won it with Real Madrid, back in 2007, while he was a runner-up with Seville in 2011. Malaga weren’t in action last weekend so starting with an away tie isn’t ideal but this is a team with plenty of big game experience in the European arena, and they won’t be overawed by this game in Montenegro.

The away team should have enough to grab the win in this game and you should take Unicaja Malaga at -1, which is provided at odds of 1.90. There is also going to be the Over/Under market for this game, and if you want to get involved with this market, you should be going OVER 161.0. This is available at odds of 1.90 for the game on Wednesday night. Bet Now!