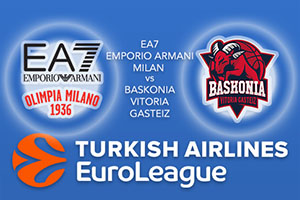 The hosts have a 3-3 record coming into this game while the Spanish side hold a 4-2 record and are in the pack of teams who are on the hunt of leaders CSKA Moscow. In historical outings, the Italians have a 6-4 record over their Spanish rivals but it was the Spaniards who clinched victory by 94-82 in the most recent outing between these sides, which occurred last season.

The Italians come into this game in buoyant mood after a 105-92 win against Anadolu in their last game. This was a new record with respect to high scoring for Milan, beating their record of 102, which had been achieved in the previous game. This means that Milan are in fantastic scoring form at the moment and with an average of 93 points per game, they currently lead the league in this respect. Rakim Sanders has averaged 15.4 points per game this season while Ricky Hickman has offered up an average of 12 points per game and Alessandro Gentile has provided an average of 11.8 points per game so far this season in the Euroleague. Things are far from boring with Milan at the moment and this provides some exciting basketball betting opportunities.

Baskonia have a strong defence in the Euroleague

The hosts are favourites for this game but if the Spanish defensive work is of its similar standard, there could be a way for Vitoria to take this game. Look to back Baskonia Vitoria Gasteiz at +3.5, which is provided at odds of 1.90. Anyone looking for the Over/Under market will find that going UNDER 174.5 at odds of 1.90 makes sense. Bet Now!