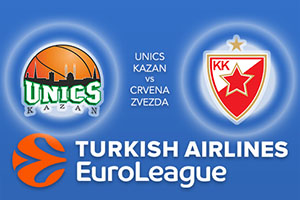 This clash features two sides that are firmly in the bottom half of the Euroleague at the moment but there is a strong history between these two sides. There have been six clashes in the Euroleague and to this point every game has been won by the home side. This is something that Unics will be desperate to continue but the Belgrade side knows that runs are made to be broken.

The Kazan side may have a 1-4 record but they’ll have a bit of confidence coming into this game. Not only did Unics win their last game, they managed to defeat Fenerbahce in Istanbul. The Turkish team were unbeaten going into that game and this could be the catalyst that the Kazan side required this season. There is no doubt that the home team has some big game players and Keith Langford is currently the top scorer, by some distance, in the Euroleague. He has managed to provide an average of 24.8 points per game, which is definitely something that has to give his team-mates confidence. Kazan need to go on a winning run and this Thursday gives them the chance to do so.

The Belgrade side needs more points in the Euroleague

This is genuinely a game that could go either way so take Crvena Zvezda mts Belgrade at +7, which is provided at odds of 1.90. If you’re looking for the Over/Under market, look to go UNDER 150.5, at odds of 1.90, with your basketball betting antics this Thursday. Bet Now!