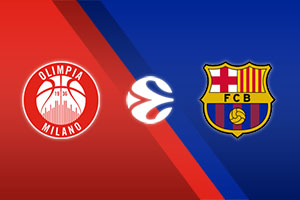 Armani (6-1) suffered its first season defeat from Bayern in Munich (83-77). However, three nights later, in Milan, the Crvena Zvezda «paid the bill». Ettore Messina’s team walked away victorious (79-62), with the score already at 21-2 in the 9th minute of the match!

The first defeat of the season is a fact for Barcelona (6-1). The Blaugrana ran out of energy and lost 85-68 in Tel Aviv to an improved Maccabi. In the ACB, Barca continued the undefeated run, winning easily over Fuenlabrada (79-69). Despite playing without Nick Kalathes, who needed some rest. International Spanish guard/forward Alex Abrines remains out of action, but tall man Pierre Oriola has recovered and will play.