Spain is a country that adores basketball, and a lot of this is down to the number of high-quality teams that can be found across the nation. One of the leading basketball teams in Spain, Saski Baskonia, was founded back in 1952, with the club being the basketball arm of Club Deportivo Vasconia. The team first played in the Spanish top-flight in 1971 and since the 1990s, the side has been one of the leading lights in Spanish basketball. The team has also made a large impact on the European basketball scene this millennium.

The first major sponsor the club had was Caja Alava, a Spanish bank, but their longest running sponsor was Taulell, which is a ceramics manufacturer. In recent times, and with the club making a major impact on the European basketball scene, the side was sponsored by Caja Laboral, a Credit Union in Spain but this agreement ended in 2016.

The range of sponsorship that Saski Baskonia has received over the years is as follows:

Saski Baskonia play their home games at the Fernando Buesa Arena, and this has been the team’s home since 1991. The arena was formerly known as the Araba Arena, with the name change taking place in 2000. For basketball games, the arena has a capacity of over 15,000 people and in January 2016, 15,554 people watched a game between Saski and Real Madrid. 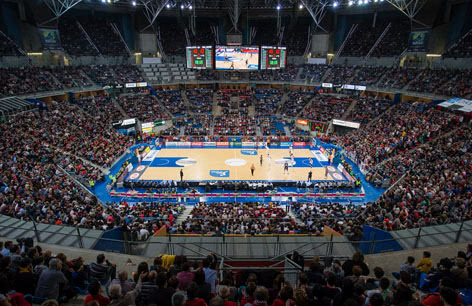 Given the level of competition in Spanish basketball, and the magnitude of some of the team’s involved, it is no surprise to learn that Saski Baskonia have a modest level of domestic triumphs. However, all of these victories have been richly deserved and fought for, making them massive achievements in Spanish domestic basketball.

The side has been the Spanish league champions on three occasions, all achieved this millennium. The team’s first league triumph came in 2000/01, there was a second triumph in 2007/08 and the team’s most recent league title, to date, came in 2009/10.

Baskonia have tasted success in the Spanish Cup on six occasions. The team’s first win came back in 1995 and there was another win in 1999. The team’s most dominant period came in the opening decade of the new millennium, winning the Spanish Cup in 2002, 2004, 2006 and 2009.

After coming very close in 1993/94 and 1994/95, when they were runners-up, Baskonia won the 1995/96 FIBA Saporta Cup. This was a triumph on home soil, giving local basketball fans the pleasure of seeing their team win European glory on home soil. Baskonia have also made an impact on the Euroleague, finishing runners-up in 2000/01 and again in 2004/05.

In October 2010, Baskonia made their way to the United States and played two games against NBA opponents. The games were played in Memphis, Tennessee and then in San Antonio, Texas. 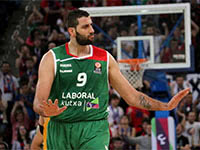 For a team that has been at the forefront of Spanish basketball for a couple of decades, it is no surprise to learn that that Saski Baskonia have a lot of notable players. The following players have all been classed as the MVP in the ACB: Kenny Green, Andrew Nocioni, Luis Scola (who received this accolade twice), Tiago Splitter, Fernando San Emeterio and Ioannis Bourousis. Elmer Bennett and Pete Mickeal are Baskonia players who have received the ACB Finals MVP.

José Calderón played with the side for three years before making his way to the NBA, where he has spent well over a decade, and in the spring of 2017, Calderón signed for the Atlanta Hawks.

Dejan Tomašević, Arvydas Macijauskas and Igor Rakočević have all featured in the Euroleague All-Stars line-up while playing for Saski, being joined by some of the players who have also represented the side in the ACB MVP list.

Both of the opening games in this series were close, with the second game being even tighter, but as we move on from Moscow, it is the Russian side that holds a 2-0 lead. This means the reigning Euroleague champions are one win away from returning to the Final Four. CSKA Moscow will know that... Continue Reading »

We are straight back into the action with Game 2 in the Euroleague Playoffs and these two teams clash again on Thursday night, which is a very quick turnaround from their clash on Tuesday evening. The reigning Euroleague champions showed that they are in no mood to let their title slip from their grasp this... Continue Reading »

Given that a number of teams have been highly consistent in Euroleague action in recent years, it is no surprise when some teams start to develop a rivalry in the Playoff stage. This is the case for these two teams who will be meeting for the third time in seven seasons at this stage of... Continue Reading »

This may seem like a Euroleague game with not too much riding on it in the final week of the regular season but there will be motivating factors at play for the teams involved in this game. The hosts are unable to claim home-court advantage in the playoffs but they are involved in the next... Continue Reading »

There is nothing really at stake in this game although the away team knows that they could take a massive jump up the table if results go in their favour at the end of this week. It has been a difficult season for Galatasaray and their 10-18 record is indicative of the struggles that they... Continue Reading »

Both of these teams hold a 16-11 record in the Euroleague so far this season and more importantly, both teams have booked their place in the next stage of the Euroleague tournament. This should be a game with plenty at stake as a win here will give the victor an improved chance of moving up... Continue Reading »