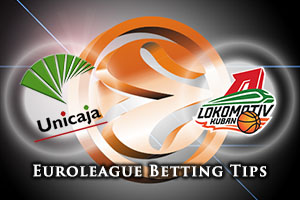 Malaga hold a 2-3 record going into this game while Lokomotiv Kuban Krasnodar have a 3-2 record coming into this game in Spain. This is a game between two teams that have a very strong defensive record so you may find that points are at a premium in Malaga on Thursday evening.

Given that Malaga have conceded an average of just 73.8 points in the Top 16 so far means that they will be feeling confident that they can play strong at the back in this one. However, they know that Lokomotiv have some great players going forward, so Malaga will need to make sure that they press forward when they get the chance. This means that Edwin Jackson need to make sure that he takes his chances when they come along. Malaga have suffered back to back defeats, with one of these losses coming at home, so they will be desperate to get back to winning ways in this game.

Lokomotiv have a very tough defence too

The hosts are seeking a second road win of the Top 16 and while they face a team with a tight defence, the Lokomotiv defensive record is impressive as well. They have only offered up an average of 71.1 points per game for the entire Euroleague campaign, seeing them rank second in this regard, so all signs point to a tough game for forwards. This will present a challenge to Malcolm Delaney, who has been in excellent form for the Krasnodar side, averaging 17.3 points per game this campaign. If Delaney hits form, he could savage the Unicaja statistics all by himself!

The bookmakers are tipping the hosts to get back to winning ways in this game but it is surely going to be a close run thing. This means taking Lokomotiv Kuban Krasnodar at +3.5, which you can find at odds of 1.90 isn’t a bad idea. If you are looking to get involved with the Over/Under market for this game, look to go UNDER 151.5, at odds of 1.90, in the game of two tight defences. Bet Now!