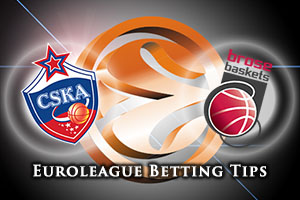 Both of these teams have a 2-2 record in the Top 16 so far this season but if you are looking to the history books for guidance, the home team looks to be the safe bet. This is because the two sides have clashed ten times in total, with two games in the regular season this year, and CSKA Moscow have won them all.

One of the most pleasing bits of news that CSKA Moscow have received this year is the news that Nando De Colo is set to return to action in this game. De Colo is the leading scorer in this season’s campaign, with an average of 19.1 points per game and there is also the fact that De Colo is the highest ranked player with respect to the index rating, with a score of 22.7. This is great news for the hosts and if De Colo can come back on top form, it could well be bad news for the German side on Thursday night.

6 teams in Group F all sit with a 2-2 record but it is Brose Baskets Bamberg who are currently in second place, just behind the leaders Khimki Moscow Region. Considering the lengthy wait that Brose Baskets fans had to endure to see their team win a Euroleague Top 16 game, the fact that they have won two games in a row has left them positively giddy. The game in Moscow represents a major challenge for the German side but with players like Bradley Wanamaker, Janis Strelnieks and Nikos Zisis looking to return to Russia in good form, there is a great deal to be said for how the away team will line up in this game.

While the German team has performed well in their past two games, it looks as though the bookmakers are predicting a strong home win. You can find CSKA Moscow at -13.5, at odds of 1.90. For the Over/Under market, look to go OVER 164.0, at odds of 1.90, with Nando De Colo keen to make up for lost time. Bet Now!